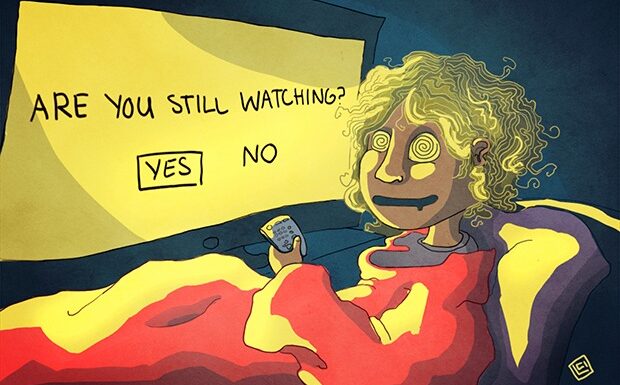 I thought it was rather apt that Collins (the dictionary-maker) had made binge-watch (verb) its Dictionary word of the year. Its use had gone up 200% in 2014.

Helen Newstead, Head of Language Content at Collins, said: “The rise in usage of binge-watch is clearly linked to the biggest change in our viewing habits since the advent of the video recorder nearly 40 years ago.

“It’s not uncommon for viewers to binge-watch a whole season of programmes such as House of Cards or Breaking Bad in just a couple of evenings – something that, in the past, would have taken months – then discuss their binge-watching on social media.”

Thinking about the above statement I feel it shows the world of interactive and passive media colliding in a way to suggest that they are no longer mutually exclusive. It seems that many need to ‘discuss’ their binge-watching almost as a badge of honour or an achievement on social media. As I have discussed, what we watch and how we watched it (a whole season of 24 in 24 hours for example) has become a part of our identity. Social media has made it easier to validate our identity but within the virtual world rather than the physical world.

Collins highlighting binge-watching as their word of the year shows how we now digest media; in large quantities over a short space of time.

Gone are the times of waiting a week for a new episode to come out. We know, we watch a season in any one evening, something that, in the past, would have taken several months. It is a guilty pleasure of many but is it mirroring a different issue? In essence, our need for instant gratification.

The way we use technology has made it so that we expect, and need, everything right now. I find that therapy in London and other major cities is in higher demand now, not only due to the change in stigma concerning mental health, but the inability for many of us to use self-control and live with tension.

In the same way that we find it hard to wait for the new episode of The Walking Dead to air, we find it hard to not check social media, refresh emails or even pick up your phone when you are bored; with nothing to do or procrastinating on work, you should be doing.

The gratification we get from sharing our stories on social media (and the refreshing of that page waiting for likes and comments) is the icing on the cake of that instant gratification lifestyle that mobile technology has given us.

Binge-watching then should not just be resigned to TV shows but to the binging, we do on a daily basis in regards to apps, social media and our phones in general. In essence, the facets of our life that we find hard to moderate and control.