Home > Blog > Why am I so self critical? 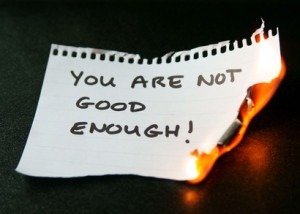 Have you ever criticised your own thoughts, feelings and actions? You might think to yourself for example: ‘Don’t try to do that new thing’ because you will never succeed’ or ‘Drink 5 coffees to wake up’ before tell you ‘how silly you are for drinking so much and feeling anxious.’

Essentially  ‘don’t bother trying’ or ‘if you try you will fail’ and ‘It’s your fault’  It’s debilitating and frustrating, to have these conflicting thoughts, you want to try new things yet you feel powerless.

Why do I criticise myself?

An example would be from when you were a child. You are riding your bike and you see a hill. Your first instinct is to ride down it as quick as you can but just as you are about to ride down at full speed you hear ‘STOP! BE CAREFUL!’ from an elder. ‘Don’t ride down that hill, you’ll hurt yourself?’ In that moment how do you feel?

Shocked that someone is shouting at you? Safe in the thought that they are looking out for you? Are you also stifled? You wanted to ride down that hill. You wanted to try but you’re not allowed in case something bad happens.

How this affects you now

his story is replicated continuously not just when you are riding your bike, but when anything potentially dangerous happens. Crossing the road would be a typical example, or meeting new people, going somewhere new or starting something new. Your brain knows there is nothing to fear yet you still get that emotional tinge that something bad may happen. You are bracing yourself for something which you know is unlikely to happen yet are scared might.

This voice doesn’t want you to try anything risky or new because you might ?hurt? yourself.

This voice is trying to save you from getting hurt, but now the voice is saving you from a new pain; the emotional pain of failing, saving your sense of self or ego.

This stops you from trying anything new, going for that new job, asking that person out or quitting that job you hate.

It’s not all bad

I have been demonising this voice, but remember that it has stopped you from putting yourself in any danger.? As time passes, however, that voice may become louder, a more prominent part of your life, and so loud that we might not see it as separate from your own voice.

When I introduce this notion to my clients a lot of them tell me they didn’t realise that that voice was different from theirs and that they didn’t have to act on it.

If you can learn to see the difference between that voice and your own and yet to listen to it when you need to you can push yourself to get what you want out of life.