Facebook is a place where friends go to make meaningful connections.

I was reading the newspaper and as I finished, I noticed the advert on the back page – Bold blue background with a small letterbox picture of a couple, with the word ‘Friends’, written underneath. At the bottom of the page was the Facebook logo. Very odd, I thought, everyone knows about Facebook, why would they need to advertise?

I look up from my paper and notice the big blue page scattered about the train. The other majority of the train participants were, as usual, on their phone.

I got my book out and thought nothing more of it.

On my way home I see this on a billboard? 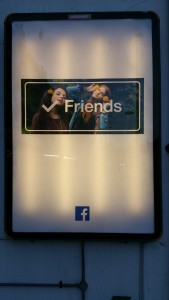 Exactly the same image as on the back page of the paper. I thought to myself, I wonder what’s going on in my virtual world?

It struck me at that moment that Facebook and Zuckerberg don’t want you looking at their advert, as that would mean you were not looking at Facebook.

We spend so long on our smartphones now, do we really need more coaxing to check one of our many social media outlets?

Or is it something even deeper than that? I was watching some television and an advert came on. :

When the Facebook banner came up at the end with the tagline ‘Friends’ it hit me that it runs deeper than just trying to get us to log onto Facebook more.

Thinking from a Lacanian / Psychoanalytic point of view, Facebook is trying to make our experiences and the notion of friendship as synonymous with Facebook. Cementing the way we relate to our friends more and more in the virtual world. Almost as if Facebook is a prerequisite to (as Facebook says) ‘a a meaningful connection.’

I see this campaign as an attempt to bridge the gap between the virtual and the physical. So that there is no longer a cognitive jump between the two.