Home > Blog > How To Stop Being Scared to Try 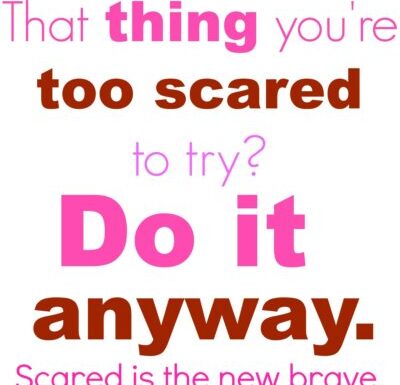 Last week we discussed where the critical inner voice comes from and how it has kept you safe from physical and emotional danger, while at the same time stopping you trying new things in case you get hurt.

It is an important asset in your life but maybe it’s time for it to quiet down so it doesn’t stop you from trying new things.

1. How you think now

Think of an example. It could be something that someone told you in the past to be careful of, or thought was dangerous. For example, someone could have told you that curry taste horrible, or you shouldn’t get too close to dogs as they will hurt you, or even that you are fat or too thin and you will always be that way. Essentially telling you a situation or object is dangerous or trying something different is impossible. These are just a few examples but think of your own example, anything that speaks to you and has stopped you from trying something new.

See that voice as a separate entity from you. You might think that it is your voice that is saying all this in the back of your mind but, ‘are there other perspectives in your head that you don’t hear?’ I like to tell my clients of an angel or devil on your shoulder telling you something in your ear but in order to act on it, you have to hear it and then make that decision. However, one perspective has been so loud for so long that it’s the only voice that you’ve heard for a while, which is why you have believed that it is your voice, your opinion, or rather the only opinion.

Start to hear all perspectives in your head, not just the one you are used to.. Draw or write them out so that you can see how you relate to them in your day to day life. What attributes do those voices have? What colour would they be? Would they be hard or soft? Big or small?

The way it looks shows how you connect to it, yourself and the world.

Now you can see these different perspectives in front of you, how would you change them? Maybe, instead of the jagged lines, it has softer edges, instead of red it can be blue. It’s about starting to minimise the impact and the perceived danger of that louder voice. Let’s try and bolster that differing opinion so that you can look at them both, understand what they are trying to tell you and choose which perspective to act on. Seeing them both as equally correct in their own way and each a legitimate opinion.

Now that you can see this voice for what it is, other choices and perspectives can become apparent. What are they telling you to do? Go for that promotion? Go to the gym or stop eating so much junk food? It’s a fresh perspective that has always been there but has been clouded by that loud voice that has always had its own way but has gotten in the way of you truly being happy. However that louder voice in itself isn’t bad, It has been trying to help you and keep you safe, so rather than banish it, try and use these perspectives in a new way. A way that allows you to weigh up all your options and make the best choices for yourself.

Remember there are many different perspectives and choices you can make. Listen to them all and make the best choice for your happiness.

Take care and see you next week