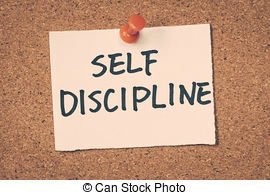 Self-discipline is something that isn’t easy to hold onto.

You tell yourself that you’ll do it later because you would rather be having fun right now; only to either forget to do it, rush doing it or not do it at all.

Why is it so hard just to do it there and then?

Society has been taught you to look for short term gain; eating a chocolate bar instead of going to the gym or watching TV instead of doing work. You put off the important things until later.

This means the important stuff never gets done as you’re focusing on what you want to do right now to make you happy.

To be self-disciplined you need to start doing the things you should be doing now, or should have already done and the things that will yield long term reward in the future. Add to that the fear of failure and it’s not surprising that so many people give up at the first hurdle and go back to being undisciplined

That’s all great but how do you start to become more disciplined and start getting the things that you want?

2: Pick one goal at a time so that you do not feel overwhelmed,

4: Focus on the long-term gain

5: Failure is your friend. Learn to take failure in your stride to know what does and doesn’t work.

6: Most importantly, make discipline a part of your life and identity.

Be prepared, focus on the long goal and start to do the things which are a little bit harder but will mean happiness in the long term.

Do the things you know you should do, RIGHT NOW not after that next episode or level in that game, RIGHT NOW.

Your journey starts here and ends with you getting what you want.

Go out and do it.